The route from The Church of the Three Bretheren, Lochgoilhead, to Kilmaglash Church, Strachur, is a pleasant day walking through valleys in the Loch Lomond and the Trossachs National Park. It could be cycled too, although there’s one section (near Curra Lochain) where you’ll need to carry your bike, but this doesn’t last too long. Most of this route follows The Loch Lomond & Cowal Way, and is therefore well signposted and waymarked.

It starts on pavement and roads leading out of Lochgoilhead towards Lettermay, and finishes in similar style between Succoth Farm and Strachur. In between is mostly hard-core Forestry roads, so comfortable footwear is advised. There’s a short steep climb near Sruth Ban falls, then the track devolves into a faint, muddy trail as you approach Curra Lochain. Bikes will need to be carried here, but you’ll soon be back on Forestry roads with picture-perfect views as you head towards Succoth Farm.

This route is the second leg of the St Munn’s Pilgrim Trail and the final leg of the North East Loop, so you may well have arrived into Lochgoilhead after traveling via Carrick Castle from Kilmun or via Lettermay Burn from Strachur, in which case you’ll already be familiar with Strachur and will have already walked the road route between Lettermay and Lochgoilhead.

If you’re driving into Lochgoilhead and doing this as a single walk, then you’ll find ample parking (suitable for cars, caravans or coaches) in the centre of Lochgoilhead at ///strapped.chilled.megawatt. If you wish to walk back to your car it becomes a 20 mile route, but if you start early, this can easily be done in a summer day; due to the long hours of daylight that Scotland enjoys. Alternatively, you could time your walk to coincide with the arrival of the 486 bus in either Strachur or Lochgoilhead. 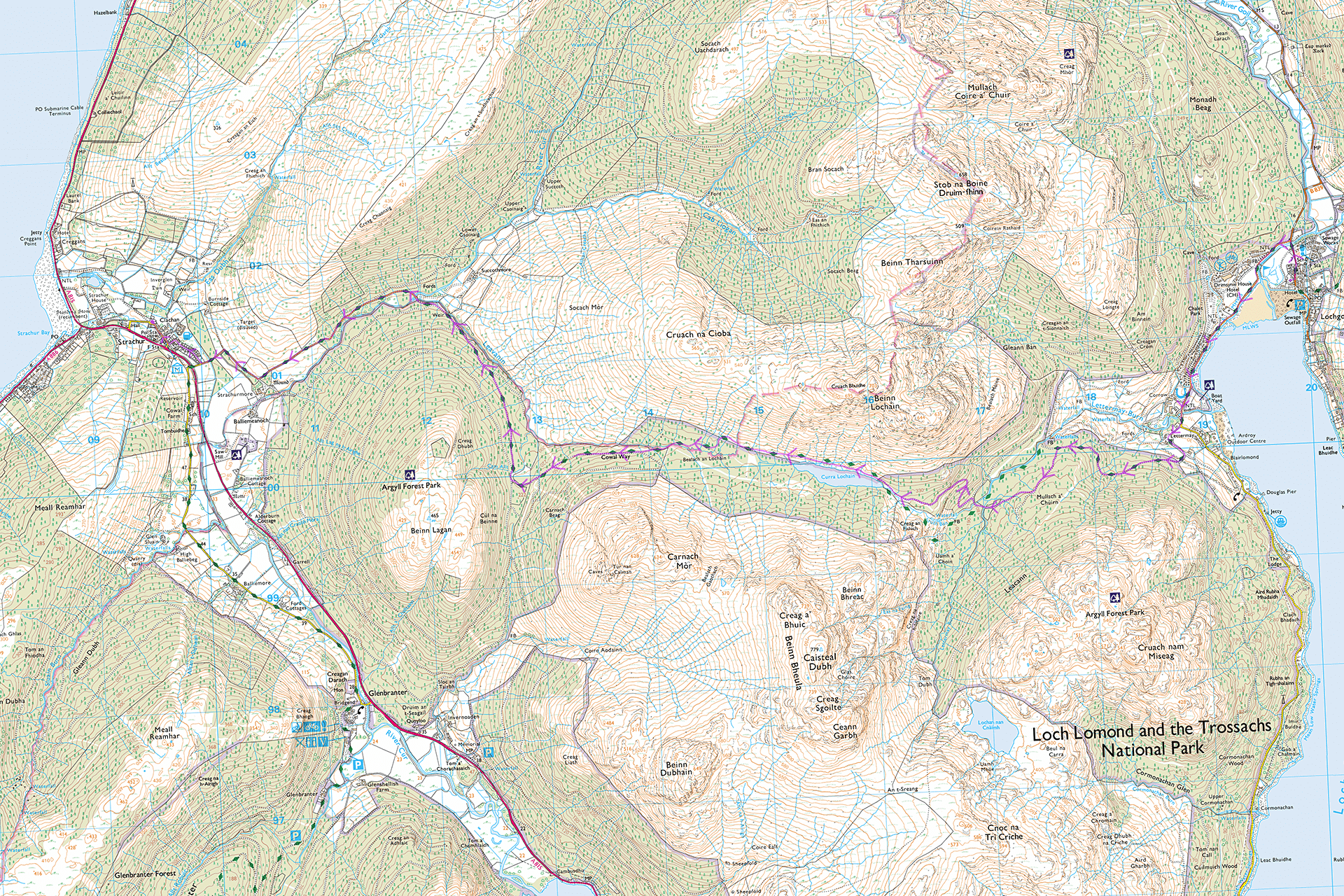 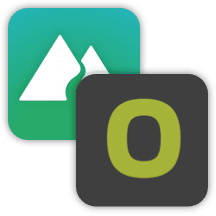 Click for an interactive map and satellite guidance using the OutdoorActive app!

The Cowal Way passes just outside of the beautiful village church in Lochgoilhead, so the easiest thing to do is to follow that. If you walked here from Kilmun however, then you’ll already be aware that you can cut along the beach, skirt the southern hem of Drimsynie Estate Golf Course and cross the footbridge to join the Cowal Way. This is slightly shorter but is sometimes inaccessible at high tide and is no good for cyclists.

So, for simplicity, exit the church gate at ///imitate.obtain.received, then turn left and head north up the street. The pavement gives way to grass verge and the road reaches a junction shortly after, near ///certainly.clogging.exporters. Turn left here (the sign reads ‘Carrick Castle 5 miles’) and follow the road in a southwesterly direction. You’ll soon come through a junction, near ///downfield.nuns.toast, with options to turn left across a footbridge over the River Goil, right into Drimsynie Estate, or straight on; along the west bank of the river. It’s this latter option we want.

Follow the road between ///backswing.window.tries and ///decking.emporium.timidly, where you’re presented with a forking junction. Bear right, following the road gently uphill. There’s another junction at ///fractions.scorched.cover; keep following the road ahead, ignoring the right fork into Drimsynie Estate. The road dips, then rises toward another junction near ///repeating.goodbyes.blatantly.

Turn right here, keeping the blue house on your right and following the gravel road up towards ///kipper.gems.warns. Here you’ll see another fork, with three cabins in the middle and the mountains rising behind them. Branch left and follow the road uphill toward another junction at ///frame.ready.outs. The fork leading off to your right here (west) is the one you want (there’s a purple, Cowal Way waymarker posted nearby at ///rescuer.juror.snowboard). This is a good spot to turn around and enjoy the views over Loch Goil behind you before you press on.

You’re now on a Forestry road heading west and gradually climbing. There’s a road branching left (south east) near ///goofy.sandpaper.fell but ignore this and go straight ahead. This road continues to climb, turning north as it does so (once again offering great views of Lochgoilhead perched upon the twinkling shores of the loch), then bears west again and curves round in a southwesterly direction. At ///hounded.camper.springing you’re confronted with a fork in the road. The purple waymarkers direct you to the right branch, which slopes downhill.

You can see Sruth Falls in the distance ahead of you. At ///envoy.duplicity.opened a waymarker on the right hand side of the road offers you the choice to continue in the direction you’re heading, or turn left down a track toward the falls. Whichever option you choose, the paths will merge just before they reach Curra Lochain. The left path offers a better experience of the falls and a longer, gentler climb. The alternative is a short, sharp 100m climb and is mostly on good surface, so arguably easier to manhandle a mountain bike.

The left path is easy to follow, so this guide will depict the other route. Carry straight on at the signpost for a short distance until you reach ///magazines.agents.whispers. The main path stretches off to the northeast ahead of you, but there’s an atv track branching off to the left (southwest) at ///blanket.respect.witless.

Follow this track for a short distance and it turns sharply upon itself banking uphill and northwest. The path is wide but very overgrown, so it’s likely that cycles will need to be lifted here. It turns upon itself once again, so it’s now bearing southeast, and the incline becomes more gentle.

As you approach ///first.clinking.polygraph you’ll see the head of the falls and the rope-guide for the other path ahead of you. The two paths follow Sruth Ban upstream, one on each side, and those who took the other route must cross the burn (with the aid of stepping stones and a rope rail) near ///onlookers.accented.moving in order to join us on the muddy track approaching the head of the lochain.

There’s a nice spot to picnic, should you wish to, near the head of Curra Lochain at ///opinion.engrossed.continued. The trail itself continues through a gate at ///compacts.without.transit and along the north bank of the water; the surface eventually gets good enough for cyclists to put wheels down, but only as far as the gate at the opposite end of the loch near ///broadcast.requires.brimmed.

Passing through this gate there’s a faint trail that cuts down through a clearway in the forest. This is a very short stretch over long grass (be wary of ticks). A forestry road materialises to your right in short time, near ///asteroid.licks.feast, and this path leads you the majority of the way toward succouth farm without complication.

Follow the path in a westerly direction, enjoying good views over the glen (unless there are forestry trees growing, in which case, enjoy the invigorating scent of fir and pine and the view of Beinn Lagan rising ahead of you). You will eventually reach a T-junction near ///decimals.liability.cabinet, turn right (north) here and the path descends gently toward another junction near ///sprains.compound.grub.

Choose the right fork at this juncture, which continues in a gently descending, northerly direction, offering good views of Succoth Farm. At ///kick.veto.giraffes the main path starts to curve left (west) and uphill again, but there’s an overgrown footpath branching off ahead, which continues downhill and south. The purple waymarkers for The Cowal Way urge you to take this latter option – and so does this guide.

This path leads through a short, leafy avenue to a gate at ///ultra.ladder.move, which is followed swiftly by a wooden footbridge over the River Cur. The other side of the bridge presents you with a junction; the road leading right heads into the farm, and the road leading ahead will take you into Strachur.

It heads northwest very briefly, then bears left (west/southwest), follow in this direction (ignoring the right turn near ///blunt.marmalade.notice) until you reach a T-junction at ///guard.treatment.cheaper. Here, follow the waymarker turning right (northwest). It’s not long before this lane turns sharply left and passes Strachurmore Sports Centre. Shortly afterward, near ///limelight.sprayer.disclose, a residential street (Forest View) branches off to the right.

Turn here, thus parting ways with The Loch Lomond & Cowal Way. Forest View bears north, then bends west (left) at ///overt.glosses.exacted. Shortly you’re presented with a complex looking junction, but if you step into the junction and look north (from ///sweated.parts.configure), then you can see Kilmaglash Church ahead of you at the foot of the hill.

Head down that road (passing Strachur Smiddy Museum) on your left, and the entrance to the church can be found near ///rationed.zealous.oxidation. Don’t forget to sign the visitor book when you enter the church – let us know if you enjoyed the pilgrimage and if this guide was helpful!

We try to keep this website up to date, but should you discover that any of our guides have become inaccurate due to path changes, or indeed, if they’re confusing in any way, please contact daniel@faithincowal.org.