There are two ancient Cowal churches dedicated to St Mary, the Blessed Virgin. The medieval church of Dunoon (where the High Kirk now stands) was one of them. In 1402 John Stewart, lord of Achagowyne, granted some land to ‘Saint Mary the Virgin and her parish church of Dunoyng’.

Another church dedicated to the Virgin was the now ruined parish church of Strathlachlan, close to Castle Lachlan. Here the name of the church bears witness to the dedication, for it was Kilmorie, Gaelic cill Moire or ‘church of Mary’.

As well as these two churches there was also a chapel of St Mary in Carrick Castle – probably a tiny place designed to serve only the household of the castle.

Some of the earliest art and poetry from Gaelic Scotland expressed devotion to the Blessed Virgin. The famous Book of Kells, probably made on Iona around AD 800, has a glorious full-page illustration of Mary with the Christ-child. In the church of Kildalton on Islay there stands a carved stone cross, possibly made about the same time. Directly below the centre of the cross is an image of the Virgin flanked by two angels, each of them holding a protective wing over her. She holds the Child Jesus, offering him for the worship of the viewer who may be standing or kneeling before the cross in prayer. Her implicit message is, ‘See, here is your saviour’. The fact that this scene is immediately below the centre of the cross reminds the viewer that the salvation that this child will bring is through his suffering, death and resurrection. There is preaching in this image. 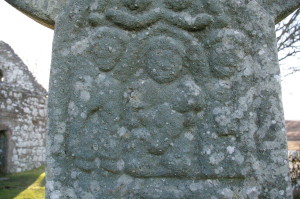 The Virgin and Child flanked by angels who spread their wings over them.

The Virgin appears in early poetry too. Cú Chuimhne of Iona (died AD 747) wrote a fine poem in her honour. Here Mary is celebrated as mother of Christ, as the one through whom the eternal, omnipotent and unchanging God became human, a powerless child.

Let us sing every day, harmonising in turns,
together proclaiming to God a hymn worthy of holy Mary.
Let us praise Mary in two-fold choir, from side to side,
so that the voice strikes every ear with alternating praise.

Mary of the Tribe of Judah, mother of the most high Lord,
fitting care she gave to languishing mankind.
Gabriel first brought the Word from the Father’s bosom;
it was conceived and received in the Mother’s womb.

She is the most high, she the holy venerable virign,
who by faith did not draw back, but stood forth firmly.
None has been found, before or since, like this mother;
not one of all the descendants of the human race.

By a woman and a tree the world first perished,
by the power of a woman it has returned to salvation.
Mary – amazing Mother! – gave birth to her Father,
through whom the whole wide world, washed by water, has believed.

She conceived the pearl – they are not empty dreams –
for which sensible Christians have sold all they have.
The mother of Christ had made a tunic of seamless weave;
Christ’s death accomplished, it remained thus by casting of lots.

Let us put on the armour of light, the breastplate and the helmet,
that we might be perfected by God, taken up by Mary.
Truly, truly we implore, by the merits of the child-bearer,
that the flame of the dread fire be not able to ensnare us.

Let us call on the name of Christ, angels our witnnesses here below,
that we may delight and be inscribed in letters in the heavens.

So Cú Chuimhne celebrated Mary as the Christ-bearer, and we are invited to find salvation by rejoicing in his birth. But early Gaelic poetry marked another darker aspect of Mary’s story – the moment when she stood at the foot of the cross and watched her son die. A seventh-century poet called Blathmac mac Con Bretain invited his readers or hearers to join Mary in ‘keening’ over the death of Jesus. Keening was the ritualised weeping and lamentation over the dead (Gaelic caoineadh). For Blathmac her grief and horror serves as a sign of faith and salvation, and the reader of the poem must grieve too, as does the whole of creation. This is the only faithful reaction to the suffering and death of her innocent Son.

Come to me, loving Mary,
that I may keen with you your very dear one.
Alas that your son should go to the cross,
he who was a great diadem, a beautiful hero.

That with you I may beat my two hands
for the captivity of your beautiful son:
your womb conceived Jesus –
it did not lessen your virginity.

More hard and grievous, was holy Christ’s tribulation,
than that of any renowned captive;
sad was the deep wound of points, O Mary,
upon your first-born.

A stream of blood gushed forth – severe excess!
– so that the bark of every tree was red;
there was blood on the breasts of the world,
in the tree-tops of every great forest.

It would have been fitting for God’s elements,
the beautiful sea, the present earth,
that they should change their aspect
when keening their hero.

Alas, for one who has loved the son of the King of Heaven,
and has seen him lying in blood;
even all those who have merely heard of his fame,
it is incumbent on them to keen him perpetually.

Happy he who has believed him,
who has loved the Lord whom we have keened;
happy every creature who sees him
in an eternal kingdom with eternal perfection.

From The Poems of Blathmac, ed. James Carney (Dublin 1964)