NN 198094 – Lochgoilhead Church is the perfect choice for those who prefer to travel off the beaten track; it’s in a beautiful village, which is hidden from the rest of the Highlands because there’s no commercial reason to go there, and the roads into Lochgoilhead are steep and twisty; one of them is unpleasant enough to be called Hell’s Glen! Despite this, it’s a stunning place to visit, with mountains cradling you on three sides, and Loch Goil stretching away to the south, where it joins Loch Long. Aside from the church, there’s also a decent public house at the head of the loch, and Carrick Castle is only a short distance away.

So; this is an isolated little village, with superb scenery, tucked away on a little visited peninsula. Hundreds of people drive over the Rest and be Thankful every month, yet never know what peace and tranquility they’re missing out on just down the (treacherously twisty) road. And, of course, that’s why it’s so tranquil and peaceful. This is the very definition of a hidden Scottish gem- and we haven’t even started on the church yet!

There are two roads leading into Lochgoilhead; the B828 peels off from the peak of the Rest and be Thankful as you approach Cowal from Arrochar and, if you’re coming from Cairndow, Strachur, or elsewhere in Cowal, you’ll want to turn off the A815 at ///nerd.advances.improves, then slalom down Hell’s Glen, eventually to be deposited at the head of Loch Goil.

The Church of the Three Brethren is on your right just before you reach the loch (at ///headstone.tradition.petty, but the car park is by the lochside, so proceed to ///grants.jammy.mount. Park up, and saunter back toward the church, taking in the views as you do so. The gates are found at ///suitable.noodle.succumbs. They appear locked at first glance, but this is not the case; this Church of Scotland place of worship is open during daylight hours, and welcomes pilgrims of all ilks – do sign the visitor book, and mention that our website brought you here.

Inside, Lochgoilhead Church is beautifully appointed. It’s a light, open space with a deeply spiritual atmosphere. The wings incorporate parts of the original 13th century church. The west wing houses a mezzanine gallery, and the east wing displays an attractive Latin cross formed of slate and stone. To the left of this, tucked away in the corner, are the medieval carved stones that qualify this site as a ‘tempting tangent’ for the Cowal Pilgrimage.

Outside, the graveyard surrounds the church, with ancient plots being closer to the building, and modern plots set a way back under the watchful eye of Ben Donich. It’s difficult to get a flattering photograph of the church from the entry path, so most people come round to the south side of the building to capture it. From here, you can see Cruach nam Miseag rising to the south west.

On the hillside above Lochgoilhead is a huge boulder, quite conspicuous in its exposed position at ///brings.ideals.origins (NN217025). It’s called Clach a’ Bhreatunnaich: ‘the stone of the Briton’. It may have gotten its Gaelic name from the fact that it was seen as a boundary marker between Cowal (part of the Gaelic territory of Dál Riata) and the neighbouring British (or Old Welsh) speaking territory of Strathclyde.

Lochgoilhead also lies in the midst of Argyll Forest Park, and the surrounding countryside is full of attractions for walkers, cyclists, birdwatchers and anyone who enjoys the wilderness. At this point we should point out that there is actually a beaten path that leads to Lochgoilhead; The Loch Lomond & Cowal Way passes through on it’s way to Inveruglas.

And finally, we’ve flagged this as a site the hardy pilgrim can walk to from Dunoon. This is because there’s a route from Ardentinny over to Carrick Castle, which can perhaps be extended to Lochgoilhead. From Dunoon it would need to be preceded with a walk from Dunoon to Ardnadam, then catch the 489 bus to Ardentinny.

You could walk the whole way by making use of our Ardnadam to Kilmun route, and then the Kilmun to Lochgoilhead route, but that would certainly be more than a day’s journey.

The ancient church of Lochgoilhead stands in the centre of a delightful village, in the north-eastern corner of Cowal. You will find the church in its quiet and secluded graveyard, a little haven of peace. The gate looks locked, but it’s not. Pull out the pin, draw back the bolt, and enter the kirkyard. 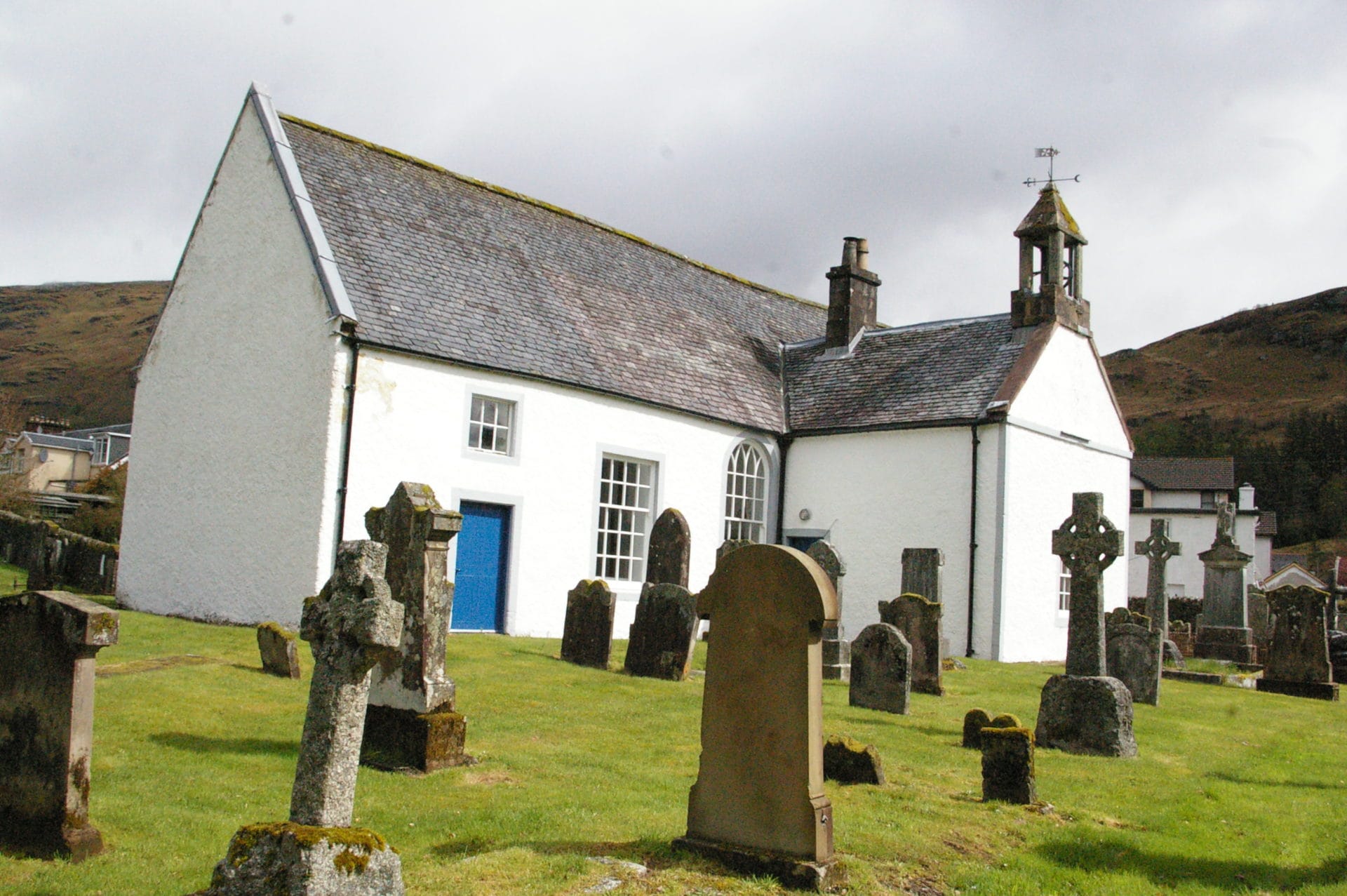 Incorporated into the present building, forming its eastern and western wings, are some parts of an earlier church. They probably date to around the 1440s, and might have been erected by Duncan Campbell of Lochawe. Up to that point the church had been in a state of collapse, and he seems to have taken measures to restore it at the same time as giving it to his newly established Collegiate Church at Kilmun.

Lochgoilhead church appears in early documents as ‘the church of the [three] brethren’  – ecclesia Trium Fratrum in Latin, and Kill nam brathairn (properly Cill nam Bràithrean) in Gaelic. Unfortunately, we have no clue as to who the three holy brethren were. Further research might reveal when their feast-day was, and that might help identify them, but till then we are at a loss.

There are a number of interesting carvings inside the church, at least one of which probably predates Duncan Campbell’s rebuilding by centuries. The earliest is a fragment of stone bearing lettering on two adjacent sides. On one side the Roman-letter inscription appears to represent part of an alphabet. The top line has a blank area where the A would be, then what looks like a B, and then a lower-case d. Squeezed between the B and the d a slight mark suggests a possible c. The following E is clear enough, and the final letter in the top row may be a short-stemmed F. The second row has a few marks which are illegible, and the last three characters may by  L, M and N.

If this is an early medieval representation of part of the alphabet, we may consider various reasons for someone having made such a thing. It might have served to instruct students; part of a complete alphabet, the rest of which is now lost. It may have served some liturgical purpose, too: The rite of consecration of a church included the writing of an alphabet across its floor. Did this stone have some relation to that rite? Or was it simply a rough piece of practice-work by someone learning to inscribe stones?

The other carved side of the stone bears an inscription,
now illegible, in Roman letters and ogham.

An adjacent surface of the same stone also has letters carved on it. Some of them are Roman-type lettering, but very hard to read. Others are written in ogham, a script which first appears in Ireland probably in the 4th century, devised to represent the sounds of Gaelic speech.

Though its principles were based in some ways on Roman ideas of writing, its letter-forms are quite unlike Roman letters being composed of dashes and dots placed in clusters of 1 to 5 for each letter, each cluster being on, across, above or below a stem-line. There are often difficulties in deciphering ogham inscriptions in Scotland, and this one is no exception. No meaningful word can be read here with any confidence.

Another stone at the site may also be of Early Christian date. It was originally part of a mill-stone, but at some point it was broken and given a new use (possibly to mark a grave) and at that point it was carved with a simple cross. The cross is carved within a circle with a diameter of 120mm. There are other examples of mill-stones being carved with crosses in the archaeological record. Mill-stones were also used as bases on which crosses were erected, the central hole serving as a socket in which to stand an actual cross of wood, or perhaps of stone. One such is mentioned in Adomnán’s Life of Columba as marking a place where the saint rested on his way from Iona’s barn to the monastery shortly before he died.  Adomnán says that the cross was still there when he was writing in the late seventh century (Vita Columbae iii, 23). 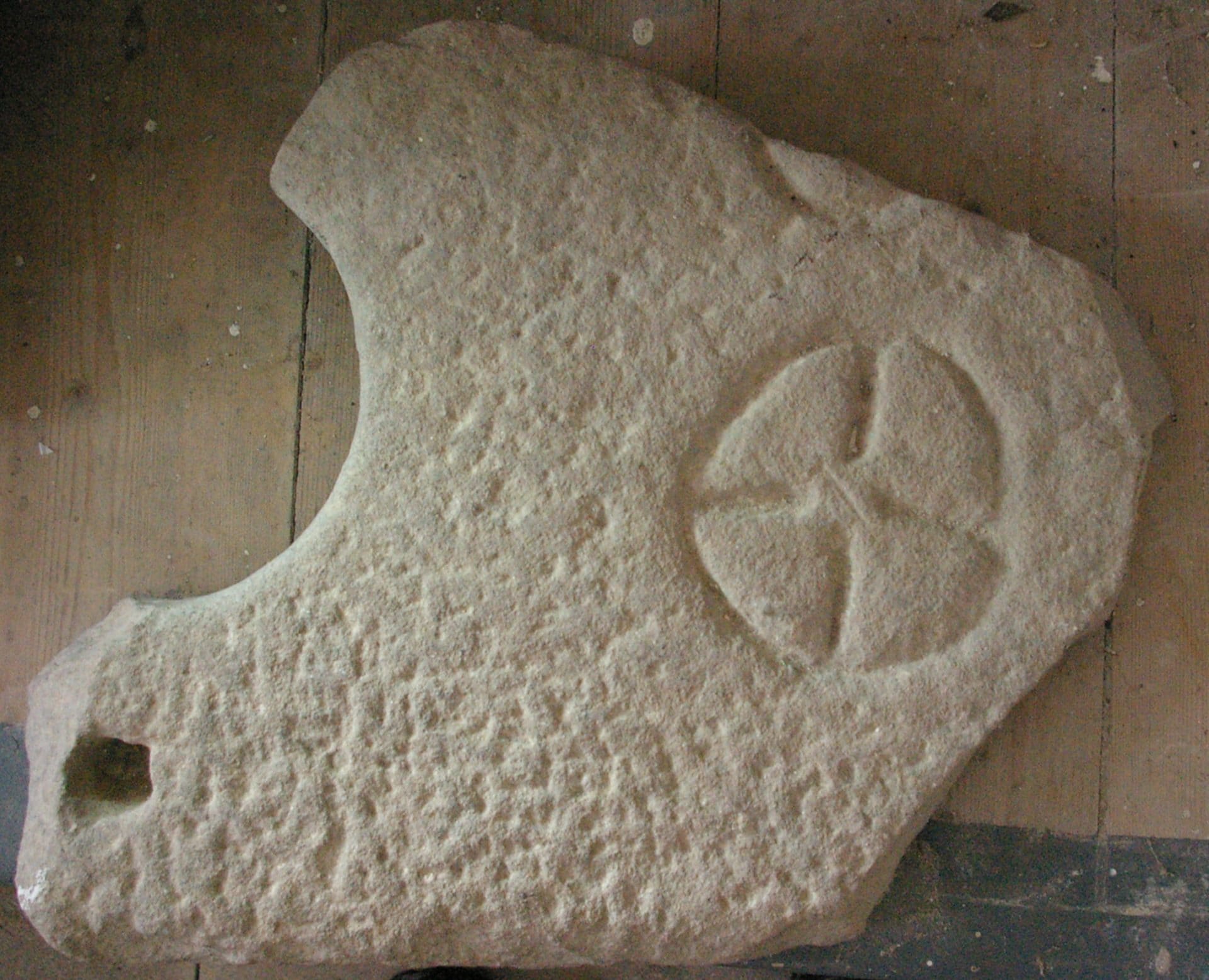 Part of a broken millstone, marked with a cross, may have served
as a grave-marker at the early church of Lochgoilhead.

One might wonder if the association between mill-stones and crosses in those early centuries was purely a matter of practicality – a smart solution to an engineering problem, or a handy way of re-using a useful piece of stone. Or did the early Christians make a more profound connection? Mill-stones grind corn to make flour. Flour is baked to become bread. And bread is blessed and broken in the Christian assembly, following the example of Christ at his last supper, to become his Body; the commemoration of his death and resurrection, and the sacrament of his presence among his people. In the presence of this modest little fragment of stone, do we hear the echo of an early Christian meditation on the Eucharist?