NS010951 – Kilmorie Church is best described as a rescued ruin. It’s unique on our list in that it’s a standing ruin, rather than remains. Where Fearnoch and nearby Kilbride Chapel show only their footings to the interested pilgrim, Kilmorie has four walls; the remains of the eastern gable from a 14th century church dedicated to St Mary, the Virgin. This church has long been associated with Clan Lachlan, and both the new and ancient Lachlan Castles are only a short walk away.

The ruins of the nearby Old Castle Lachlan, and the pilgrims access between Kilmorie and Strathlachlan River, have been improved over the years by the Lachlan Trust. There’s always more work to do however, so if you enjoy your time in this magical part of Scotland, please donate to their cause. Meanwhile the church itself is now used as the Maclachlan family mausoleum. Whilst you’re free to wander the grounds of the churchyard, there are locked gates on the entry to the ruined gable for this reason.

Two interpretation boards illuminate the history of the site; one by the roadside and one just outside the churchyard enclosure. There’s also a wishing well within sight of the first board, on the opposite side of the road. Finally, there’s a walk (indicated on the second board), leading west from the chapel toward Old Castle Lachlan and Inver Restaurant – both of which are well worth your time. If you have the time and the appetite for a more challenging walk, then do try our loop onto the hills to find Kilbride Chapel.

Getting here is fairly simple, but beware when using a sat-nav: if you’ve used the map links at the top of this page (which are the coordinates for the actual church), then some sat-navs will send you down an impassable, unnamed road just before you the current Strathlachlan Church. Ignore any such instruction and aim for a large lay-by directly outside Kilmorie, at ///glitz.strutting.detail. Use this reference as your destination, and you should be directed along the B8000 (either north from Kilfinan, or southwest from Strachur).

After parking, you may wish to continue down the road a little further on foot. There’s a concrete basin on your left by the roadside, which collects water from a small rivulet, and has long been associated with the church. Tobar Cill Moire, ‘the well of Mary’s Church’ is said to have been a wishing well, perhaps even an ancient holy well – although it’s current manifestation looks much more modern. It’s a humble wee thing, with no information boards or fancy plaques alerting you to it’s presence; although it is marked on Ordinance Survey maps. The well can be found at ///shudders.grazes.jingles.

Kilmorie chapel, visible from the road, sits in the centre of a large circular enclosure, itself bordered by a ring of large trees. The double gates at the roadside are locked, but there’s a single gate just to the left of them. Situated, as it is, on the valley floor, this area gets a lot of sunlight, but due to the height of the trees, it’s perhaps best viewed in the early afternoon, or at a time of year when the leaves aren’t yet on the trees.

The churchyard offers all sorts of things to keep a keen mind occupied; there are gravestones both ancient and recent – many of them carrying the Maclachlan name; there’s a pillar from an ancient Celtic cross – the top of which is kept in Strathlachlan Church; there’s the sound of the river and the birds – making this an almost romantic place to visit; and there’s often a floral display put on by nature – depending on when you arrive, you could see Snowdrops, Bluebells, Daffodils or Wild Thyme.

Should you wish to spend more time exploring this Scottish pilgrim haven, then we highly recommend walking the loop out to Kilbride Chapel, which takes in both of the Lachlan castles, as well as offering excellent views over Loch Fyne from the hilltops.

The ancient church of Strathlachlan is now a ruin, but a beautiful one, and well worth a visit to see its remains. The eastern gable is the surviving part of the medieval church. In old documents it is called Kilmorie which appears to be Gaelic cill Moire ‘church of Mary’, though some have suggested that Kilmorie is a corruption of Cill Maelrubhai ‘church of St Maelrubha’. While the latter is possible, local tradition in the eighteenth century was that St Mary was the dedicatee, and local pronunciation of the name also suggests that Mary was the saint commemorated here. There is a well at the roadside, a two minute walk from the church, called Tobar Cill Moire, ‘the well of Mary’s Church’. Isobella Cameron (1909-1983) of this parish recorded that it was once known as a ‘holy’ or ‘wishing’ well, suggesting that it was used in popular devotions. 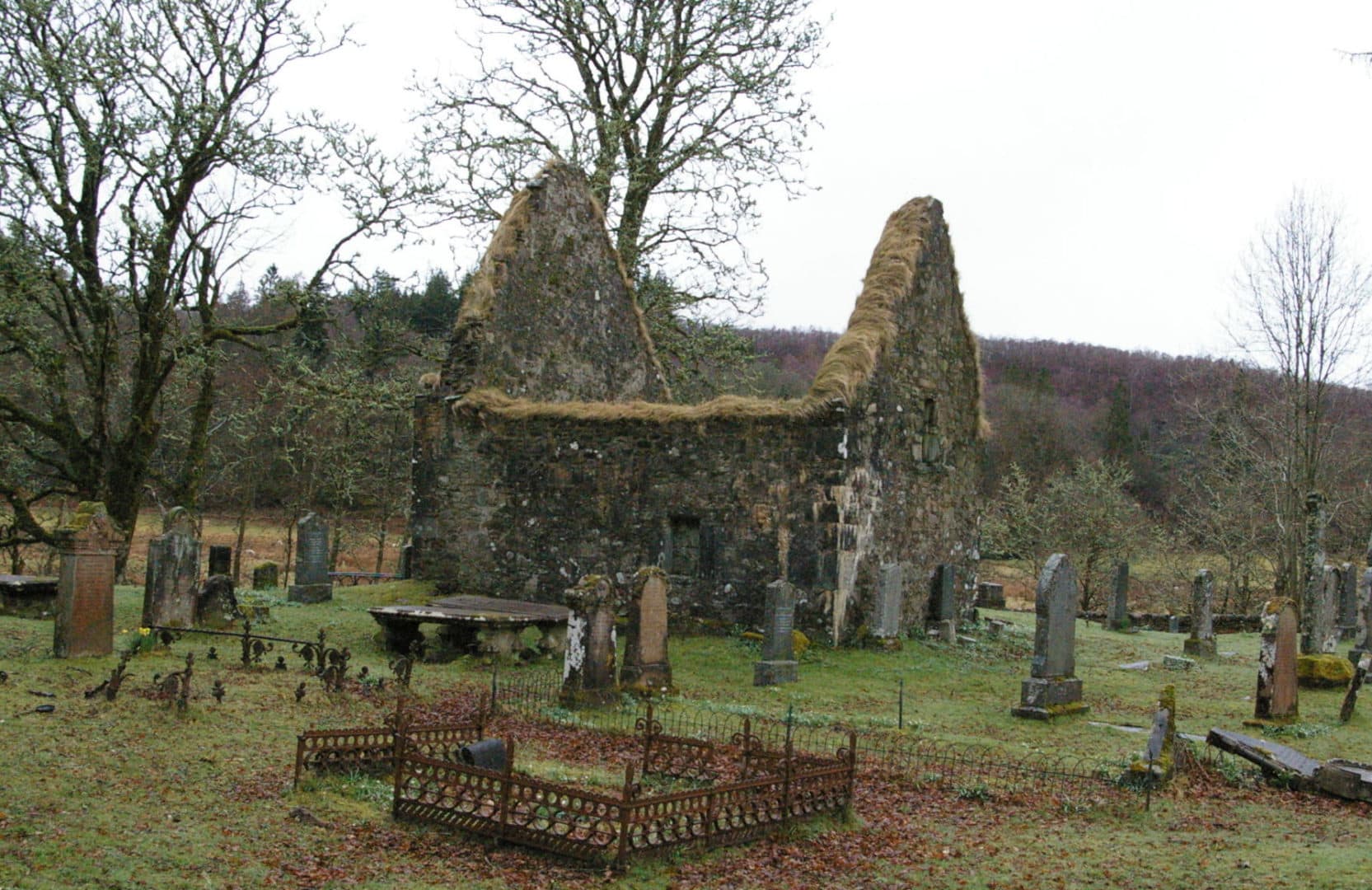 No written record of the church survives before 1543, but it was probably a good deal older than that. It lies close to the ruins of old Castle Lachlan, the seat of the Maclachlan family who ruled this district in the middle ages and later, and who gave their name to the area – Strathlachlan. The proximity of castle and church is eloquent testimony to the the relationship between the clan chief and the priests (and later the ministers) of the church.

The first edition of the Ordnance Survey map shows the proximity of Castle and Church (image courtesy of National Library of Scotland).

The close tie between Clan Lachlan and Kilmorie continues today, since the old church has become the family mausoleum for the Maclachlans. The late chief – 24th of that line – was Marjorie (‘Marnie’) Maclachlan, who died in 1996 and is buried by the door of the mausoleum, close to the remains of her ancestors. Her husband (George Stiles Rome, who took her name but not the chieftainship of Clan Lachlan) is buried on the opposite side, having died two years before her.

Kilmorie was abandoned when a new church was built circa 1792 on the roadside almost a mile to the north-east (NS021958). This is still the parish church of Strathlachlan. It is not normally open except for services on Sunday mornings. 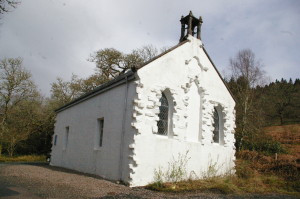 The modern church of Strathlachlan replaced the one at Kilmorie in the eighteenth century.

In the churchyard of Kilmorie, close to the eastern gable, stands a tall medieval stone cross – not necessarily in its original position. Though the top of its head has been broken off, its octagonal shaft and the lower part of its head remain. Another piece of this cross is now kept for safekeeping in Strathlachlan church. Below you can see how it must have looked in-situ, thanks to a painstaking reconstruction by local photographer David Fiddes. The top two images show the shaft how it currently appears, while the bottom two model how it may have looked originally. The inset picture shows the remaining piece of the stone head, which is now kept at Strathlachlan Church, and was used by David to approximate the completed look. 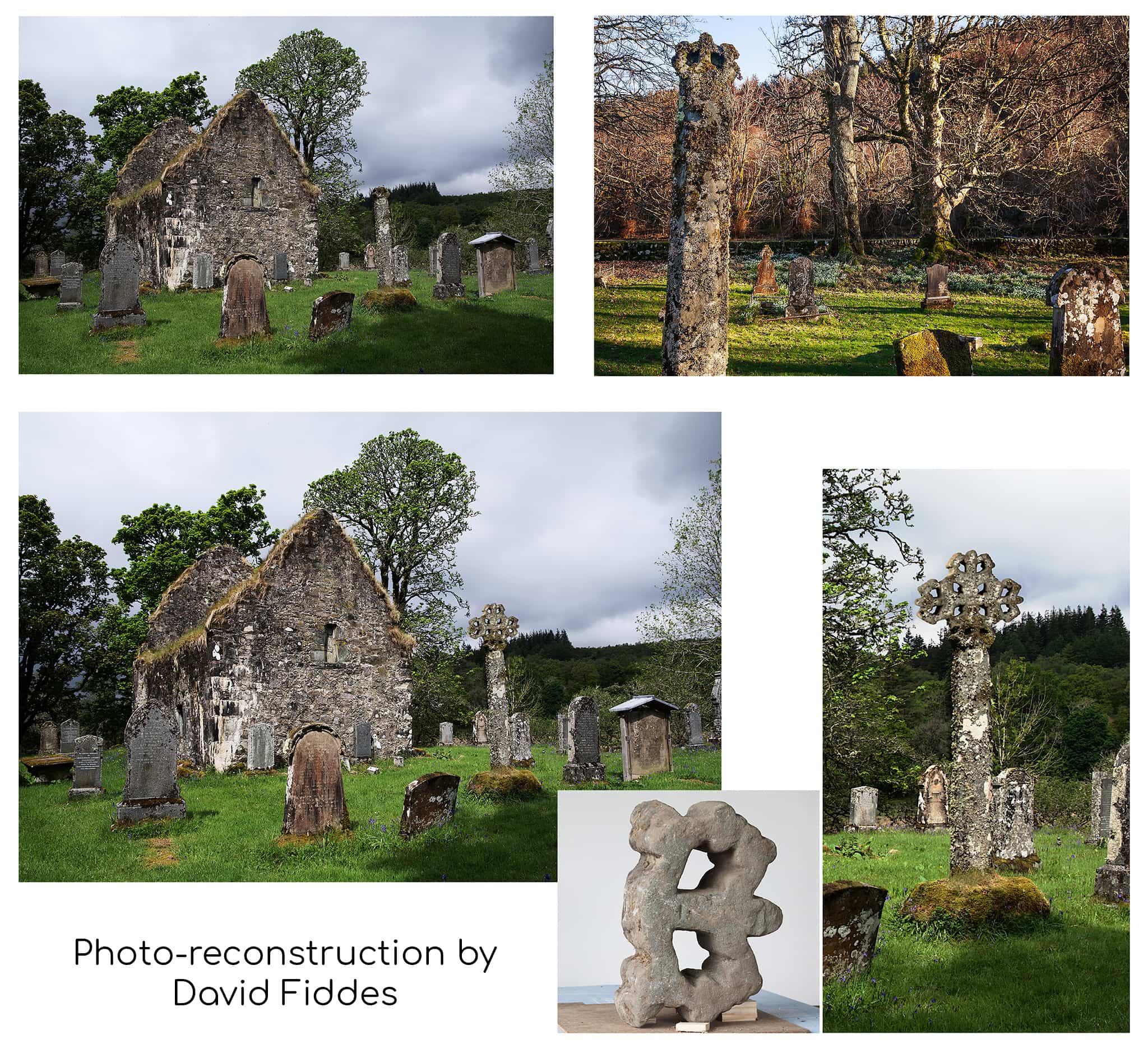 The ‘well’, Tobar Cille Moire, is a roadside basin, fed by a burn. There are no remains of its former use as a holy well. The basin does not seem to be ancient. A hand plunged into it to see if any tokens had been left there (coins, quartz pebbles or the like) came out holding nothing but the mud which the burn had carried into it off the hillside. Nevertheless, we should recall Isobella Cameron’s observation that it was known as a ‘holy’ or ‘wishing’ well. 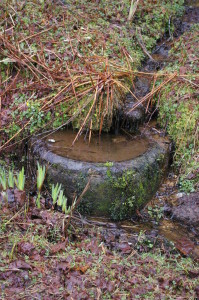 (assuming you're staying in or around Dunoon or Portavadie)