NN189128 – Kilmorich Churchyard is one of our ‘tempting tangents’ and although, on first glance, it seems there’s only a few ancient graves and majestic trees to see here, its location makes it a very tempting site to visit. This pilgrim site is right by the roadside, so it’s easy to find. In fact it’s next door to Loch Fyne Oyster Bar and the Tree Shop, which means not only are there plenty of parking spaces, but there’s also somewhere close by to get a tasty meal. If you’re more inclined to go for a walk, then there’s plenty of those nearby, and there’s even a wee community history museum and gallery, called Here We Are, tucked between the garden centre and the restaurant. And not to forget Fyne Ales, a fantastic local brewery, is just a short distance away.

If these tourist attractions are not your scene, then the discerning pilgrim would do well to time their visit to arrive shortly before sunset. Being situated at the head of Loch Fyne means that there are great views over Glen Fyne and, as the sun sinks below the cloud line, it bathes the surrounding hills in the most beautiful, golden light making it easy to see why we call rural Scotland ‘God’s Own Country’.

We’ve paired this site with Cairndow Church, which is now called Kilmorich Church on OS maps (incidentally, making one of our easiest sites to find in real life, one of the hardest to find on a map – it’s no longer named or even indicated). Some of the ancient carved stones and relics originally housed on this site have been moved to the beautiful little church on the other side of the loch. It’s definitely worth visiting these two together.

To get here, follow the A815 north out of Cowal, and turn left, when you reach the junction with the A83, toward Inveraray. Follow the road on a sweeping left hand bend around the head of the loch, then the entrance to Loch Fyne Osyter Bar appears on your right just as the road begins to straighten out. If you’re not planning on visiting the restaurant, cafe or visitor centre, then park in the overflow car park at ///spare.drummers.risky. The graveyard is just at the bottom of the hillside to the northwest of you, only a 2 min walk away.

Pass through a gate at ///innocence.cutback.hype, which is signposted for the ‘Tree Hoose’, and Kilmorich churchyard is on your right. There are some ancient headstones, some in enclosures, scattered around a central mound of turf that may well mask the foundations of the original church. From here, if you look south east over the head of Loch Fyne, you can see the ‘new’ Kilmorich church at the heart of Cairndow village.

Just beside the Loch Fyne Oyster Bar, at the site traditionally called Clachan, an old graveyard, surrounded by a wall and some fine trees, is all that remains of the old medieval church of Kilmorich (Gaelic cill Mhuirich, ‘the church of Saint Muireadhach‘). The identity of the saint is not clear. The church itself has vanished, but a turf mound in the centre may cover some of its foundations. 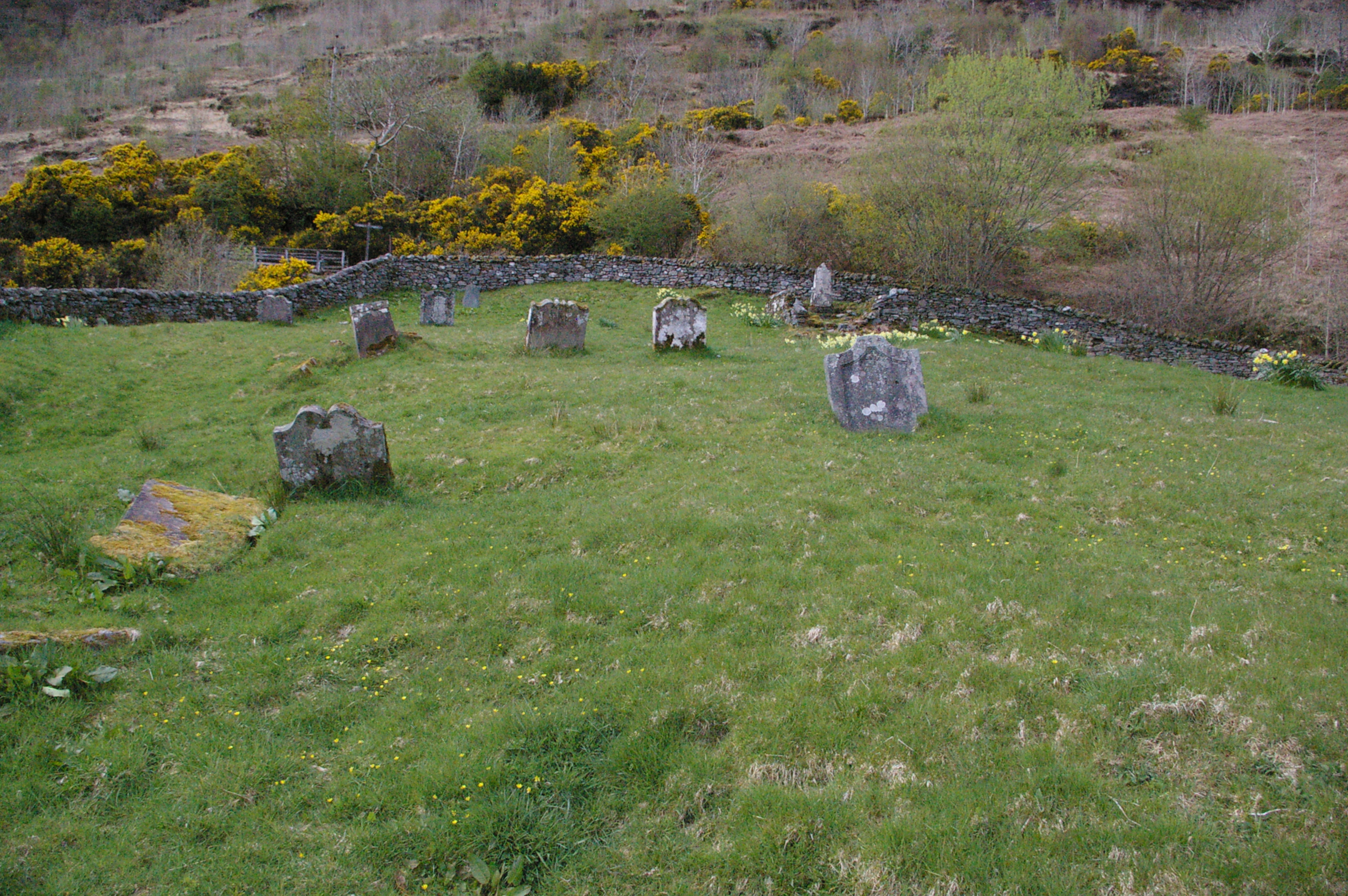 A handful of gravestones remain in the medieval churchyard
of Kilmorich, surrounded by its enclosure wall.

The church of Kilmorich is first recorded in the 1240s, when it was granted to the Augustinian Abbey of Inchaffray by Gillecrist filius Malcolmi Macnacthan (Gillechriosd son of Maolcholuim MacNachtain), presumably the head of the clan whose seat was at nearby Dundarave Castle, the MacNachtans (otherwise MacNaughtan, MacNaughten etc). It would be interesting to know just why the MacNachtans thought that assigning their church to a monastery at some distance from their lands was a sensible thing to do. Why did they want to support Inchaffray? Could it be that they were trying to curry favour with the mormaers of Strathearn, who had established the Augustinians at Inchaffray four decades earlier?

This medieval kirk of Kilmorich was abandoned and a new building erected 3km away, on the other side of the loch, at Cairndow (NN180107) (càrn dubh, ‘black cairn’). At Cairndow you may see a medieval font, a broken grave slab and a damaged cross-head of possibly 12th-13th century date. These probably all came from the medieval kirk of Kilmorich when the new building was built and the old site abandoned. It is worth making a wee detour from the old Kilmorich site to Cairndow to see them.

There are some fine big trees around the ancient graveyard. Perhaps some of these are the ones planted by the parishioners in 1819, after the move to the new kirk. The records of the Kirk Session say that a number of parishioners gathered and went to the old kirkyard carrying young trees and planted them there ‘for to ornament the place where their Relations who have gone before them & their Forefathers have been Deposited’.

It was also directed in the minutes of their meeting, ‘that all the said plants be this day dedicated wholly for the use of the Poor of this parish and that none of the said plants are to be cut as long as they keep from withering, excepting where it may be found necissary (sic) to make room for the rest to grow.’

It is nice to note from this record that these people saw in trees both an aesthetic value (‘ornament’) and an economic one which would serve not landowners but the needy.