NR995841 – Kilmodan Church is a beautiful little building, situated on a water-meadow in the Clachan of Glendaruel. It’s an active church and part of West Cowal Churches. There are hillsides and mountains surrounding you on three sides, but they’re far enough away not to feel oppressive. To the south, the River Ruel winds it’s way across the valley floor, making the whole scene feel expansive and peaceful.

The church is easy to find and there are several parking options. Should you wish to make the short hike up to St Modan’s Well beforehand, you might prefer to park in the lay-by above the village, at ///riverbank.blackbird.modest. From here you have a commanding view over the valley floor toward the church. You can complete the walk, then enter the village on foot from the north, visit the chapel and circle back out to collect your car or bicycle.

If you’re in more of a mood for peaceful reflection, then there’s a parking bay near the church at ///waggled.rebirth.schematic, or better yet, a parking area directly in front of the church at ///flip.moss.affirming. This latter is large enough for a minibus or motorhome but the road is narrow and the surface is poor. There’s an information board at the edge of the car park, which introduces you to the Cowal Pilgrimage and encourages you to collect leaflets from inside the church.

The church is regularly in use by the community, and is well maintained by the Friends of Kilmodan and Colintraive. You can enter, during daylight hours, and dedicate the prayer of St Modan to your own church, or simply enjoy the peace and quiet! There’s an ancient graveyard surrounding the church, with generous sized plots and some extraordinarily large headstones. Combined with the peaceful location and beautiful surroundings, this could be one of Scotland’s most enviable resting places.

In the southwest corner of the graveyard (///ripe.devotion.tolerable) is a lapidarium; a gallery of carved and sculpted stones. These are thought to be of the Loch Awe tradition, dating from as early as the fourteenth century, and certainly worth your attention. There’s a visitor book inside the church, please do sign it – it lets people know their work in maintaining this rural gem is appreciated – and if you could also mention this website, we would be most grateful. There should also be a full compliment of leaflets giving more detailed information on each of our pilgrim sites. These were written by Dr Gilbert Markus, and are very interesting in their own right; much of the information they contain is not actually duplicated online.

The parish church of Glendaruel is traditionally called Kilmodan. The name is Gaelic, ‘the church of Saint Modan’. It is situated in the lower reach of the long glen that stretches north from Loch Riddon to the pass called Caol Ghleann (‘narrow glen’) on the road that ultimately brings the traveller to the shore of Loch Fyne.

Sited on a beautiful meadow on a bend in the River Ruel, the present church was built in 1783 on the site of a seventeenth-century church built by Sir Dugald Campbell of Auchenbreck. A plaque commemorating him is embedded in the wall of the church. 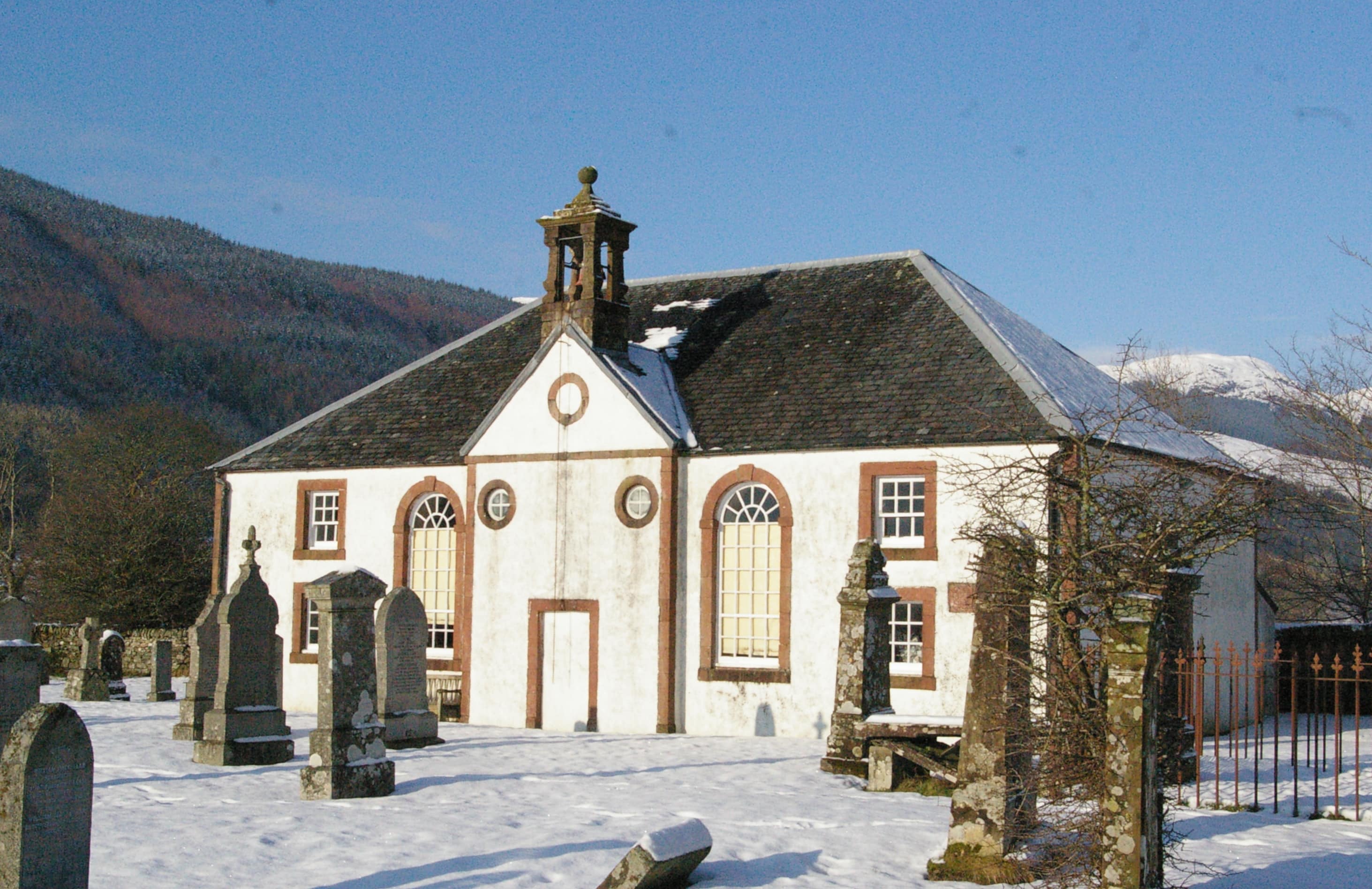 That church had itself been built on on the site of the medieval church of Kilmodan. Nothing remains of the medieval building, but a fine collection of nine medieval carved stones can be found in a little building in the SW corner of the lovely churchyard. Some of these were created by stone-carvers from the ‘Loch Awe school’ – itinerant craftsmen who made such work all over Argyll – in the fourteenth and fifteenth centuries. One of the stones commemorates ‘… daughter of John …’ (her own name has been worn away). She is shown at prayer, telling her beads. 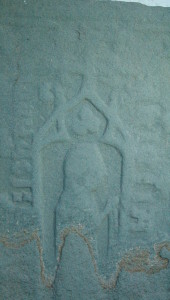 The church predates even these stones, however. It is recorded as early as the mid-thirteenth century, and it probably has its origin some centuries earlier than that. 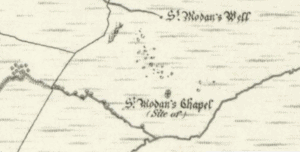 On the hillside above, to the east, there is a St Modan’s Well (NS002844). It was marked on the OS map a century and a half ago, but at some point in the succeeding decades knowledge of it was lost, and it disappeared from the maps. It was further obscured by commercial forestry operations on the surrounding hillside, and changes to surface drainage were thought to have destroyed it by the 1970s. But Faith In Cowal, with some willing volunteers, rediscovered it in the summer of 2015. Read about the search for it here.

Some pieces of quartz, a bright white hard stone, were found in it. These stones were often used as a simple offering or gesture of prayer at holy wells – also in graves. Their presence here may indicate the use of this well as a place of prayer or pilgrimage in the past. Now that the spring has been found the Colintraive and Glendaruel Development Trust have made something of the site, installing signage and a beautiful sculpture trail to help pilgrims to find their way there from Kilmodan church. It is a walk of less than an hour.