NR934788 – Kilfinan Church is a wonderfully well kept church in a quiet rural village just north of Portavadie Marina. It marks the westernmost point of our Cowal Pilgrimage. It’s an active church and is part of West Cowal Churches. Kilfinan has an impressive lapidarium of ancient carved stones, some of which are thought to date as early as the sixth century, and a wee room at the back – entrance beneath the bellcote – with more information and local historical artefacts. The churchyard is sprawling and diverse with so much to see, from ancient headstones to crumbling ruins and a gated burial enclosure. Not to mention the rich colours and varieties of lichen and moss, which are a testament to the pure air quality we have in Scotland.

The church sits in the centre of Kilfinan village, directly opposite the community hall, and is easy to find. Simply follow the B8000 south from Kilmodan, perhaps stopping for a bite to eat in the the beautiful villages of Tignabruaich or Kames, and the road will eventually loop back north; towards Kilfinan*. There’s space to park a car or minibus outside the community hall at ///forgives.undivided.exit, and the church is open during daylight hours.

Outside of the community hall is a ‘Discovering Cowal’ information board; these boards are dotted around Cowal and are remnants of a previous initiative to boost heritage tourism in Argyll. Others on our trail can be found at Inverchaolain and near Cairndow. Although they’re dated, they’re still quite interesting and informative. This one directs you to hunt for a particular gravestone, and a ruined sundial in the churchyard.

Crossing the road and entering the church, you’ll discover a simple interior unusual in it’s length. The exposed wooden beams are dark-stained, but the pews are a much lighter shade of rosy brown, and the windows let in a lot of light. There’s a visitor book inside the church, please do sign it – it lets people know their work in maintaining this rural gem is appreciated – and if you could also mention this website, we would be most grateful. There should also be a full compliment of leaflets giving more detailed information on each of our pilgrim sites. These were written by Dr Gilbert Markus, and are very interesting in their own right; much of the information they contain is not actually duplicated online.

Two streams join together just behind Kilfinan Church, and this makes strolling around the churchyard a more pleasurable experience as the sound of rushing water permeates the space. To the north side of the church is the lapidarium; housing carved stones from the early Christian period, and some medieval stones carved in the style of Iona.

There are two entrances to the gallery; the ground level entrance allows you to view the stones up close, whereas the staircase to the upper level entrance leads to a mezzanine floor. Here you can view some of the stones from above, as well as reading about each of the stones on information boards placed to mimic the location of the stones beneath them. In here you’ll also find a glass case containing human remains, unearthed during refurbishment of the gallery, and one containing a stone depicting what is thought to be a sheela na gig.

If you’re staying in Portavadie, there’s a nice walk to Kilfinan that takes in part of the Loch Lomond & Cowal Way footpath.

*There is a road running between Kilmodan and Kilfinan, and your sat-nav may direct you this way. However, this road is narrow, twisty and badly surfaced. It is not kind on your suspension. Cyclists may prefer the shorter journey time but, if you’re driving, the road through Tignabruaich is much easier, and affords better views.

Kilfinan or Gaelic Cill Fhionain, ‘the church of St Finan’, stands on a steep hill above a tight bend in the burn, in the middle of the village which takes its name from the church.

It is not certain who the Finan was who is commemorated at Kilfinan, as there are many saints of that name. There was a St Finan son of Rimíd who was a monk of Iona and who ended his life in AD 660 as bishop of Lindisfarne in Northumbria. His feast-day was on 17 February. There was another Finan commemorated in the ninth-century Félire Óengusso on 16 March as Fínán laindrech lobur, ‘bright-shining Finan the leper’. Kilfinan may have been dedicated to either of these, or to another Finan entirely. 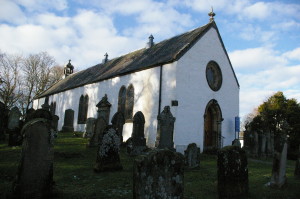 Though the church building has been much altered and added to in the post-Reformation period, it clearly stands on the site of the medieval church, and even seems to incorporate parts of the older building in its fabric. The long narrow shape of the present church echoes the form of the medieval building which was built for the enactment of the liturgical drama and for sacramental use. The architecture of Scottish churches changed after the Reformation, when a greater stress was placed on the talking minister – praying and preaching – so that the typical Scottish church began to be designed with that in mind, and to appear more like an auditorium. Kilfinan, however, has retained its earlier form.

Kilfinan parish church was granted to Paisley Abbey in the thirteenth century. This was a time when the Stewarts, with their powerbase in Renfrewshire and with Paisley Abbey as their principal church, were expanding their influence in the lands of the Firth of Clyde. Coming under political and military pressure from the Stewarts, Duncan son of Ferchar and Lamont (Laumannus) son of Malcolm, Duncan’s nephew, granted the church of Killinan (i.e. Kilfinan) to Paisley Abbey. By the same charter they also granted to Paisley ‘the chapel of Kilmor’ with its pennyland (that is Kilmory, ‘St Mary’s chapel’, 6 ½ miles across Loch Fyne, just outside Lochgilphead (where the Argyll & Bute Council offices are now). 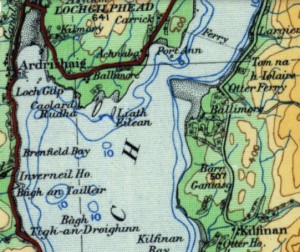 Kilfinan (in south-east) and Kilmory (in north-west) on OS quarter inch map 1920s (image courtesy of the National Library of Scotland).

The Lamont or Laumannus who made this grant can be presumed to be of the family of the Lamonts who held lordship in Cowal for centuries, but whose power was diminished first by encroachment from Stewarts in the south, and later by Campbell expansion from the north.

In the seventeenth century the Lamont family – under Sir Coll Lamont – constructed an aisle alongside the church, in whose vault members of that family were buried. There is now a fine collection of medieval carvings in the vault, some of which may date to as early as the ninth century. The presence of these earlier stones clearly points to an origin for this church centuries earlier than the present buildings indicate, and much earlier than the thirteenth century when Kilfinan first appears in the written record.

At the time of writing (summer 2015) there are plans afoot to conserve these stones, and to mount them in a specially designed lapidarium on the site, so that visitors can enjoy them more easily, and so that these fine carvings do not deteriorate [edited in 2019 to confirm that this lapidarium has been built with stones mounted in a lower level, and information boards mirroring their placement in the gallery above].

For further information about this church, please see the congregation’s own website.

(assuming you're staying in or around Portavadie)