NS007965 – Kilbride Chapel is the most remote pilgrim site on our itinerary. You will likely be out on the hills for three to four hours if you wish to take in all that this site has to offer. The chapel itself has very little to recommend it; only the footings remain, and these are so overgrown that you may struggle to see them even once on top of them. For this reason it’s very difficult to find – but it is possible if you have faith and follow our guide.

What really recommends this site is the landscape, the views, and the history that permeates them. We’ve paired Kilbride Chapel with a nearby well, Tobar an Longairt, which was constructed around the same time as the chapel but, unlike the building, the well is still holding fast against the ravages of time and the movements of people.

The well is evidence that there was once a village on these remote Scottish hillsides. The hardy pilgrim who makes the journey into the hills will discover that this site overlooks a narrow part of Loch Fyne, and that a ferry used to connect what was then Portindrain township with what is now Crarae Garden.

Anyone who makes the journey will be rewarded for their efforts with the picturesque grounds of Castle Lachlan, the impressive ruins of Old Castle Lachlan, a wonderful, secluded bay from which to enjoy a picnic or a sunset, and astounding views over Loch Fyne, and the Kintyre peninsula.

All of this can be enjoyed before even reaching the chapel; not to mention the close proximity of Kilmorie Churchyard, Inver Restaurant and Strathlachlan Caravan Park, which combine to make this a surprisingly diverse place to visit. If one is going to visit Kilbride, it makes sense to start from Kilmorie Church. In fact, we have a detailed guide to the walk between Kilmorie and Kilbride in our Enjoyable Journeys section of the website.

However, if you merely wish to make the journey out to the chapel or nearby well, and come back via the same route (rather than the loop we’ve outlined elsewhere), then the most efficient place to start is by parking in the large car park just by the elegant wooden bridge at ///verb.twists.farmer.

From here it’s a simple case of crossing the bridge, following the path past the old castle around the headland and to the end of the bay, then maintaining a northerly bearing over the hills. Stay true north, crossing two rivulets and two stone walls until you reach the chapel footings at ///freed.spearing.shirt. Once you’ve found the chapel, head due east to find the well at ///output.slang.guideline.

The journey is far more complex than these broad strokes make it appear, however, so we recommend you read through the pilgrim route guide for the Kilmorie to Kilbride Loop in order to be better prepared, and make use of the GPS trails offered there.

There used to be a ferry operating across Loch Fyne from here – this is the narrowest point in the loch. The ferryman used the sheltered water behind Kilbride Island, just below, as the harbour, and crossed over to Crarae – a distance of only 1.7km. It may be that the village and chapel which stood here for centuries grew up here partly because there was a long-standing ferry. Perhaps the caiseal itself, if that’s what it was, was built to control the ferry-crossing.

The enclosure surrounding the chapel may be the remains of an Iron Age fortified settlement or cashel (Gaelic caiseal) that was later adopted by monks or clergy for the enclosure of their early church site. The aerial photo below (copyright Bing Maps) shows the footings of the chapel walls within the cashel. Beyond the cashel to the north-east are the remains of farm buildings and walls belonging to a modern (eighteenth- or nineteenth-century) settlement. They may be associated with the township of Portindrain, now vanished but shown on early maps at NS018976. 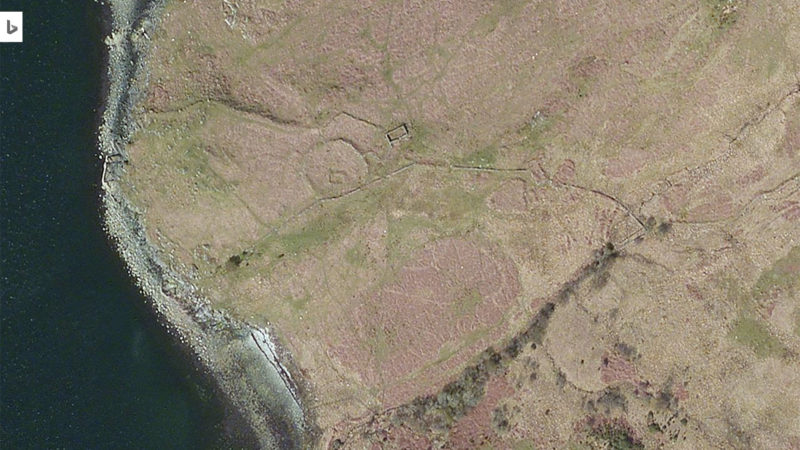 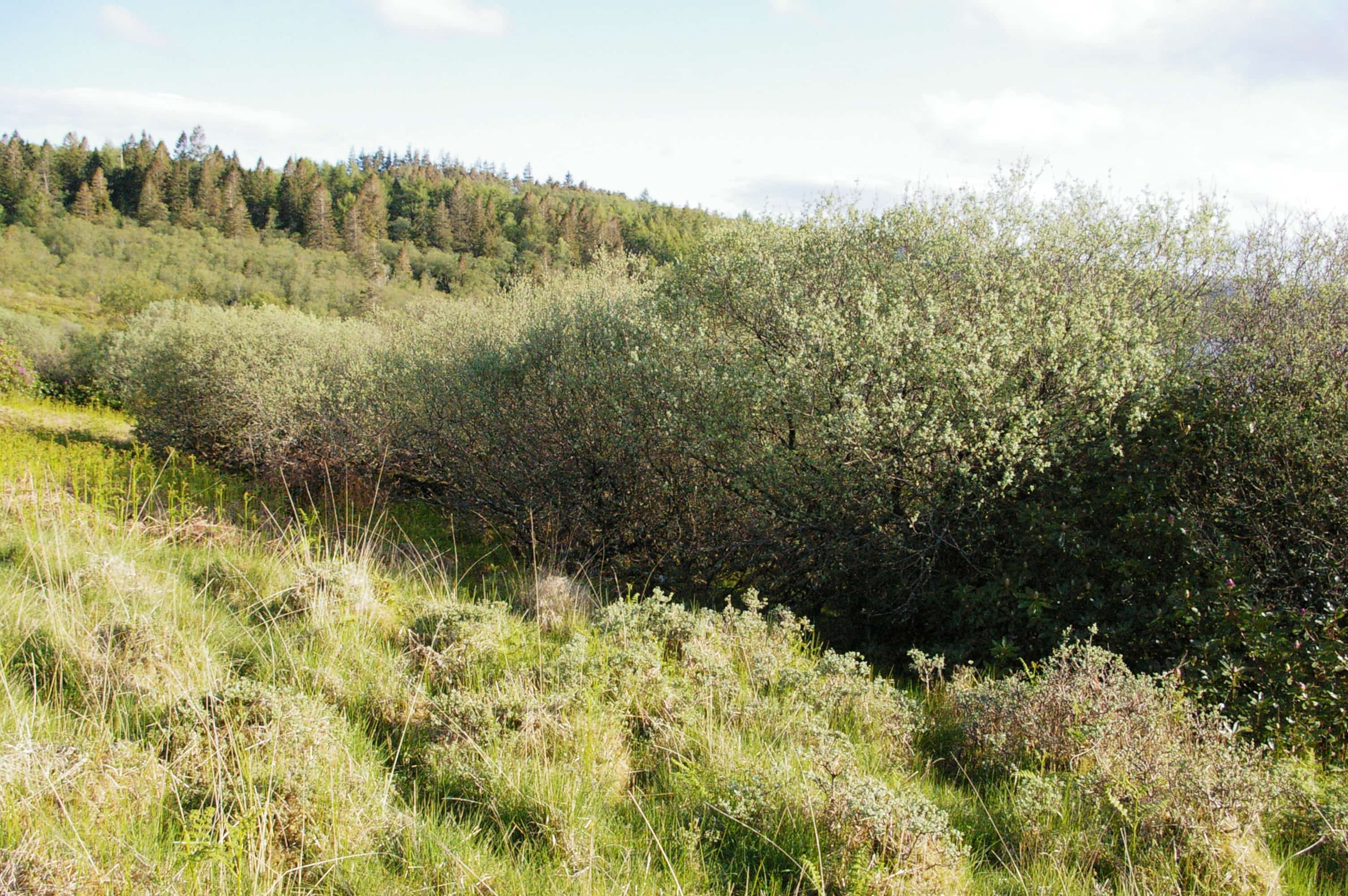 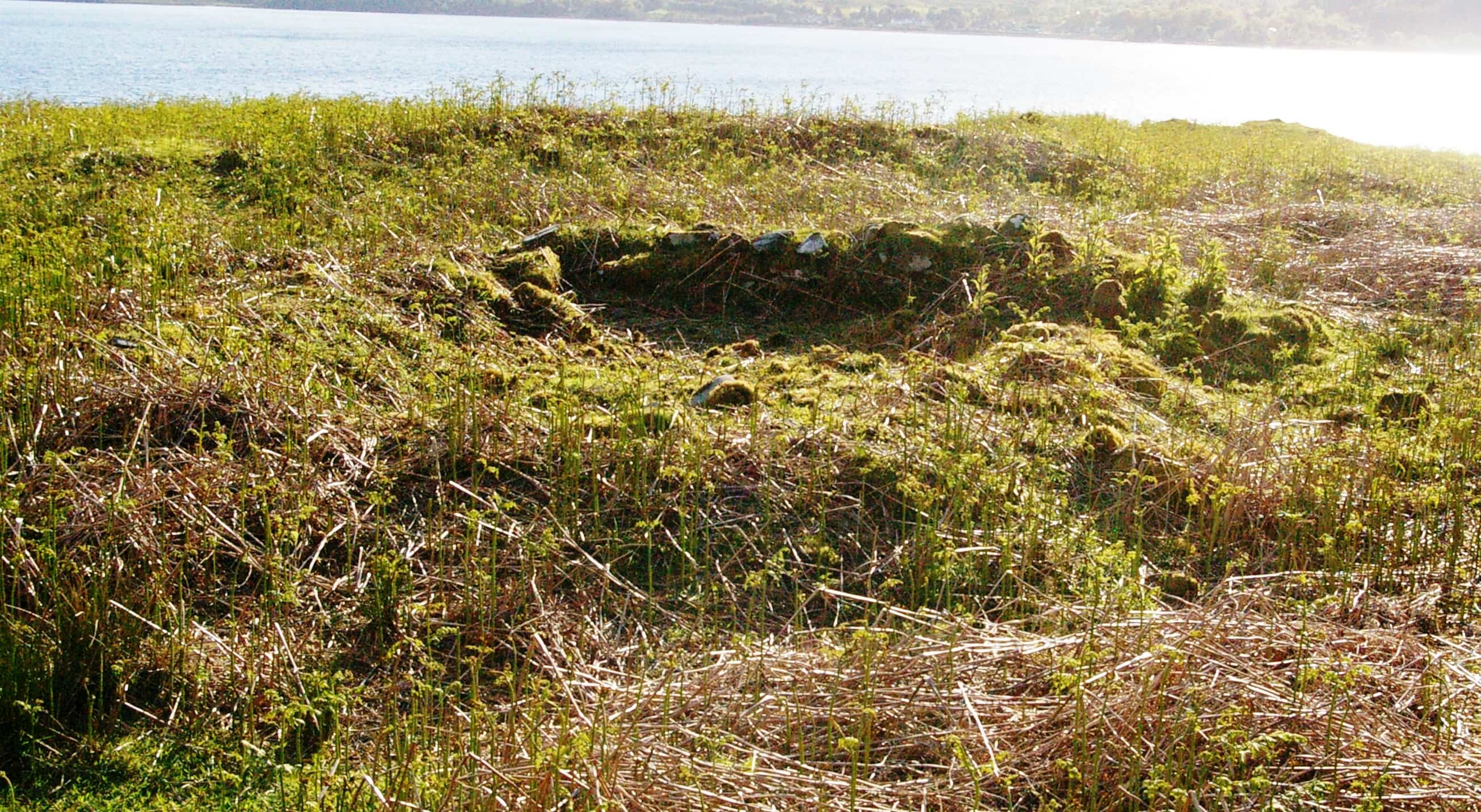