NS 09095 75301 – Inverchaolain Church is perhaps the most isolated of our pilgrim sites in the sense that, by land at least, it isn’t near any of the others. It’s a long drive out of Dunoon, along a road that doesn’t really go anywhere. But it is a very lovely drive; skirting the shore the entire way, you’re treated to views over the Firth of Clyde, followed by views across to the Isle of Bute, the bustling town of Rothesay, and the distinctive silhouette of the Isle of Arran looming behind. You’ll then pass old Toward Castle and the expansive grounds of Knockdow Estate, before rounding the corner and heading north past the oil fuel filling station. This is for military ships, not for your car. It somehow makes the already impressive views even more imposing when you’re suddenly faced with a giant grey war ship, or brightly coloured oil tanker.

There being only one road (albeit single track and in need of repair in places), it’s relatively easy to find Inverchaolain Church. There’s a large parking area – big enough for three cars, or a small minibus perhaps – located directly out front at ///pints.exonerate.embodied.

There’s also an interpretation board titled ‘Discovering Cowal’, which has information about the area as a whole, rather than the church specifically. These boards are dotted around Cowal (you will find one near Kilfinan Church and one in Cairndow too) and, although they’re dated, they’re still quite interesting. This one does the courtesy of explaining how to pronounce the name: ‘Inver-hoo-lan‘.

Incidentally, rather than cycling or driving to Inverchaolain, you could choose to walk from Dunoon, perhaps then supplementing that by doing what a car can’t do, and following the trail through Glenstriven Estate to Ardtaraig and looping back to Dunoon via Ardnadam and the camels hump.

However you get there, the churchyard is a very peaceful place to be. It sits at the roadside, but this road is rarely used so, on a clear day, all you can hear are the birds singing. There are wonderful views from behind the church looking north toward the head of Loch Striven, and the churchyard itself is a panoply of lichen covered gravestones. There are headstones dated much earlier than the church building, which is the fourth incarnation of a chapel on this site.

Unlike most of the churches on our pilgrim trail, the exterior is not painted white; instead it’s a rather understated grey slate and pebble-dash, surrounded by mature evergreens. The large doors are, unfortunately locked – the church is now the property of a private owner – but you can still peer through the windows to see the handsome interior. 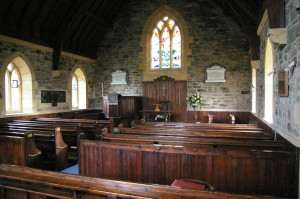 Lack of indoor access means that this is a site best visited in pleasant weather. Doing so will allow you to spend time in the churchyard enjoying the incredibly vibrant hues of lichen and moss adorning the ancient headstones. There are a number of plots bordered by iron fencing, which has been there so long it is slowly being reclaimed by nature.

All in all, it’s a wonderfully peaceful place to pass some time, making it hard to comprehend the layers of history and lives that have come together in this place. Inverchaolain Church is a very ‘tempting tangent’ for the discerning pilgrim in Scotland.

The former parish church of Inverchaolain lies on the east shore of Loch Striven. To get there you drive south from Dunoon, round Toward Point, and then north up the loch-side – unless you fancy a walk. The church lies near the end of the road, on the way to Glenstriven Estate.

In the past it was the parish church serving a wide area, with people even rowing across Loch Striven from as far away as Colintraive. In 1755 the population of the parish of Inverchaolain was 944, by 1791 this had declined to almost half at 504. The reason? The agricultural revolution meant that landowners could make more money from sheep than from tenants. So, whilst there were only 504 people in the parish, there was upwards of 14,000 sheep!

Nowadays there’s barely anyone around, and there’s certainly no regular service here. In fact the church was sold in 2017 to a private owner. The door remains locked and the site untouched (at time of writing – 2020). It’s not known, as yet, what access, if any, will be made to visitors. The present church was built in 1912, replacing one built in 1812, which was destroyed by fire. This in turn had been built on the site of two even earlier buildings. For this reason there are many gravestones in the churchyard with dates much earlier than that carved into the stone above the church door.

However, the medieval church of Inverchaolain seems to have been a couple of hundred yards away, on the hill to the north east of the present church; Sron Dearg. The information board, outside the current church, claims that the medieval church was dedicated to St Bridget. Alas, careful inquiry reveals no convincing account of which saint was actually commemorated at Inverchaolain.

Although you can no longer access the interior of the church, the Clan Lamont Archive, situated in the manse next door, welcomes visitors who are interested in the history of the clan and its area. They boast a fine collection of artefacts and documents in the renovated white building, which also houses a holiday cottage. Perhaps an intrepid researcher might spend some time there and find the answer to the question of the mystery saint.