NR 9328.8169 – Auchnaha Cairn is a truly wonderful little spot, with a permeating sense of serenity to it. Set in a clearing on forestry land only a short walk from the roadside, it feels as if you’ve stepped back in time and are a million miles from anywhere. The walk up to the cairn is a gentle climb through the edge of the woodland. The track is overgrown but the route is incredibly well waymarked, so you won’t get lost. The clearing isn’t hinted at – neither by the landscape nor the waymarkers – and so it’s sprung upon you as a pleasant surprise of sunlight and stones. It’s best to visit when the sun is fairly high in the sky, as the clearing is surrounded by tall trees. The stones are easier to appreciate outwith the summer months, when the bracken has died back, so a spring or autumn morning will be ideal.

The main draw in this area of Cowal, is Kilfinan Church, which is a beautiful church with extensive churchyard and a wonderfully restored gallery of ancient engraved stones. The route to Auchnaha Cairn is approximately 2 miles (3.2km) north of Kilfinan. If you’re staying in Portavadie and visiting Kilfinan on foot or bicycle, then it’s worth taking the extra time to enjoy this peaceful cairn. It’s a pleasant walk along a quiet road to reach the start of the woodland route, you can find a detailed route guide here.

If you’re staying in Dunoon, then driving is your best bet. You’ll want to park the car at ///awesome.thumbnail.tasks, just make sure to tuck it in as far to the left as you can; this road is actually the driveway for Ballimore House and Ballimore Farm Estate, and large vehicles often come in and out here. After parking the car, head south on foot down the road (B8000).

You’ll see that the road dips and then climbs again and bears left. The start of the walk to Auchnaha Cairn is just after the dip: walk down the road until you see a stream coming downhill from your left and passing under the road. Keep following the road but keep an eye out on your left (to the east) for yellow discs with black arrows, which are nailed to the trees. You’ll find them at ///stirs.reset.masts, they’re not immediately obvious; there’s no pathway and no sign, so keep your eyes peeled.

It’s no more than a ten minute walk following the trail and the plentiful yellow discs uphill along the edge of the forest. You emerge from the woodland, cross a clearing, then clamber over a fallen tree-trunk into the next wooded area. Pass through a final set of disc markers, and all of a sudden there it is: a disordered collection of huge stones that once formed a cairn. The stone of most interest to us is at the north eastern edge of the array; the south-facing side has a small Latin cross carved near the top. It’s easy to miss, as the stone is covered in lichen and quartz, but spend some quiet time observing, and it will make itself known. There’s also a stone at the western end, which has been carved in elegant curves – the reason is unknown; if you can shed some light, please get in touch.

On a hillside to the north of Kilfinan a neolithic chambered cairn may be found hidden away in the forestry. Erected four or five thousand years ago, it was a ‘dwelling for the dead’, no doubt reflecting in some way the view of the afterlife which people entertained in those days. It is of particular interest to us because, apparently in the early Christian period, someone carved a simple Latin cross on one of the stones comprising the forecourt and entrance to the cairn. 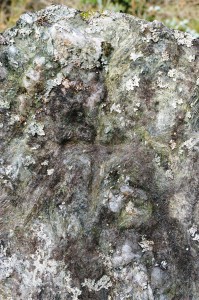 The cross carved on the stone finally revealed itself … only just. The stone is already so rough, so full of quartz and other lumps, that carving is not obvious.

It is impossible to know now what exactly the carver and his or her community intended when they placed the cross here. Did they think that the cairn was a dangerous place, associated with the ancient dead whose spirits might harm the living now walking the earth? In that case the cross might have been intended to control those dark forces and to protect the early Christian folk of Cowal from harm.

But we know that in this early period of Christianity people used to mark graves with a cross not in order to protect themselves, but in order to help the dead who lay there. When a child died unbaptised in fifth-century Gaul, his heartbroken parents buried him under the sign of the cross, with an inscription in which they reassured themselves that, even though this child had not become a Christian, God ‘will give rest to any member lying beneath the noble sign of the cross, and the child will be heir to Christ.’

At this cairn we may therefore imagine that early Gaelic-speaking Christians carved this cross as a prayer for the dead people buried there, whom they saw as their own unbaptised but beloved ancestors. They did so hoping that Christ, who died on the cross, would recognise them as his own.

It is also worth noting that early Christians in the Gaelic world treated pre-historic burial mounds as boundary markers. They regarded the dead ‘ancestors’ inside them (whether they really were their ancestors or not) as a protective presence on the edge of their land defending their descendants’ claim on it. So a seventh-century family might bury one of their own in a prehistoric burial mound; in order to express a perceived continuity between themselves and their supposed ancestors – thus expressing a continuing sense of their right to occupy the ancestral land.

This location was recorded by Skene in 1834 as Clachan tagart. He doesn’t say where he obtained this name, but presumably it was a local informant. He translates the name as “priests stones” (without an apostrophe), and he understands it to be the name of the whole cairn. But it seems that he did not quite understand his informant. The name should be read as Gaelic clach an t-sagairt, “the priest’s stone”, and it is therefore not the name of the entire collection of stones which formed the cairn, but of a single stone. Presumably referring to the one with the cross inscribed. 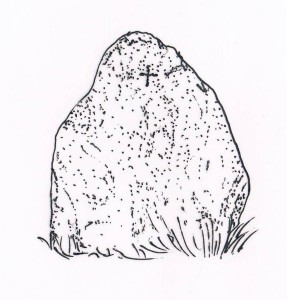 When you get to the cairn (which is in a clearing in the forestry) you will see the main axis of the chamber is aligned NE-SW. Go to the NE end and look at the two wings of the ‘forecourt’. At the far end of the left (east) wing there is a big stone standing up. Go to the other side of the stone, and you will see the cross.

(assuming you're staying in or around Portavadie)