↓ Skip to Main Content
Home › Pilgrim Thoughts › We are all Pilgrims

We are all Pilgrims

Why do people go on pilgrimages?

What’s wrong with staying where you are?

What’s so special about the place you are going to?

The word ‘pilgrim’ comes from the Latin word peregrinus, meaning a person who lived in the Roman empire but was not a citizen. He or she lacked the security, legal rights and social status which citizens enjoyed. So the peregrinus was in some ways a permanent stranger or outsider.

And peregrinus was the word used in early Latin translations of the Hebrew Bible for someone who ‘dwelt as a stranger’. They lived as aliens, strangers in the land, people uprooted, refugees, wanderers. Such people lacked worldly security, so their status was a mark of humility and trusting dependence on God.

This is what underlies the early use of the word ‘pilgrimage’ by Christians. It was not fundamentally to do with ‘a long walk to a holy place. It was a way of being in the world while retaining a kind of freedom: as Jesus said, ‘They are not of the world, even as I am not of the world’.

Such a way of being implied that:

It was this being ‘in the world but not of the world’ that inspired early writers like Augustine. In the very first sentence of his City of God he wrote of how Christians were wanderers in this world, living by faith.   The City of God was our true homeland, and we lived as peregrini in this present world.

Make that Journey
When someone ‘goes on a pilgrimage’, they may be drawn to a place for all kinds of reasons: Jerusalem or Bethlehem because of their associations with Christ. They may go to Rome or Iona, Whithorn or Cowal because those places have associations with special people in the past or special moments in the church’s story. 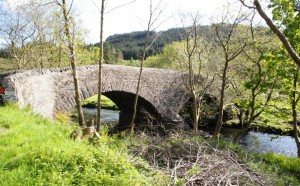 But in some ways the important thing is not where we go but the fact that we are going. By making the journey we are uprooting ouserlves, even if it’s only for a few days, from the normal structures which surround us. Structures of authority may make us feel organised and protected, but they may be protecting us from God. The order and routines we have which help our lives run smoothly may be fine – but they may also stop us hearing the Word. And maybe the Word wants to disrupt our lives and stop them running so smoothly and efficiently.  Maybe Love seeks to disrupt Order.

So a pilgrimage is a little drama to open up our imagination. We can use it to break out of our routine for a short while and listen for that Word. Without the boss telling us what we should be doing, without the TV telling us what we should be buying, without the usual and oh-so-normal structures of our lives. By walking, by prayer and reflection in a new place with new people, we listen again for the Word.

There is nothing magical about this. No automatic enlightenment.  And even the intention to make such a journey is a sign that the Word is already speaking to you, that you want to listen and hear anew. As a ninth-century Gaelic poet said of what was then a popular pilgrimage:

Going to Rome,
great hardship, little profit.
The king you are seeking there –
you won’t find him unless you take Him with you.