Rhododendron Ponticum – a plague on Cowal

A plague has befallen Cowal. An invasive species which is devastating not only to native plants and trees but also to wild animals and fish, and is damaging the local economy and the human environment. 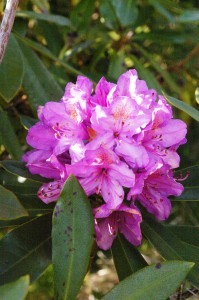 With their dark leaves and bright blooms, it is not hard to see why landowners planted R. ponticum all over their estates.

Rhododendron ponticum is a bushy plant that can grow into quite a substantial tree. Its shiny dark green leaves and the abundance of beautiful large flowers that appear on it in the early summer make it in some ways a very attractive plant to have around. Indeed so attractive was it that from the late eighteenth and nineteenth centuries, landowners planted a lot of them.  They were seen as an ornament to their estates, and they also provided good cover for gamebirds.

But at that time no one understood the hugely damaging effect that R. ponticum would have on the Scottish countryside. Since then the native woodlands and wildlife of Scotland have in many areas sunk beneath a blanket of invasive Rhododendrons. Let us think about what is happening:

Such is the threat to Scotland’s environment posed by this plant that vigorous new laws have been passed by our Parliament to stop its spread and to reclaim land from it. Conservation organisations and landowners are also taking steps to eradicate it, especially from the vulnerable native woodlands such as those of Cowal. 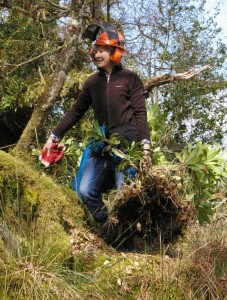 A R. ponticum plant is removed from coastal oak woods. Young plants can be uprooted fairly easily, and fairly liven up a campfire.

Watch this space for news of how the eco-pilgrim in Cowal can take part in local efforts to restore habitat and biodiversity.