A song to take with you

adminPosted on October 4, 2015 Posted in Uncategorized 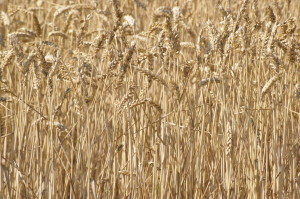 The Faith in Cowal project has adopted a beautiful Gaelic hymn as a kind of anthem, a song for pilgrims to sing, for local congregations to share with their visitors, for visitors to take away with them.  It’s a Gaelic hymn, reminding us of the roots of Christianity in this part of Scotland, and the fact that in these parts the faith was expressed in the Gaelic language for over a thousand years – from its very beginning.  It invites us to sing in the same language as Colum Cille, Fintan Munnu, Modan, Brigit and most of the other saints commemorated by the place-names of this landscape.

And its words are a simple expression of trust using the kind of images (seed and harvest, sea and fishing net, the two arms of Christ) which must have sprung naturally to the mind of the farmers and fishers of Cowal over the centuries. The song was originally written in Irish Gaelic,  but has been transformed (pretty minimally) into Scottish Gaelic for use here.

Click here to open a PDF of the words and music:  Aig Crìosd an Sìol – Scottish Gaelic with music

It is simple, and very short (about 40 seconds from beginning to end).  Let’s learn it, sing it, share it, and celebrate with it – in congregations or gatherings, and on our own; in churches and on the road or track; at the end of an evening of food and drink, at a funeral … anywhere where we find ourselves reflecting on the shape and direction of our lives, on our finiteness and fragility, on our hope.

A video of it will shortly be added to this post so that you can learn it even if you can’t read the music. 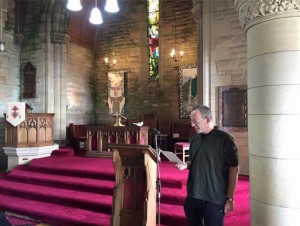 Meanwhile, here is a photograph of Gilbert giving the song its first public outing: at St Columba’s Church in Strone, on the occasion of a visit by the Moderator (a Gaelic-speaker himself) on 17 September.  This church offers hospitality every week to a group of local  Gaelic-learners who offered a warm welcome (and some great food and drink) to their visitors.